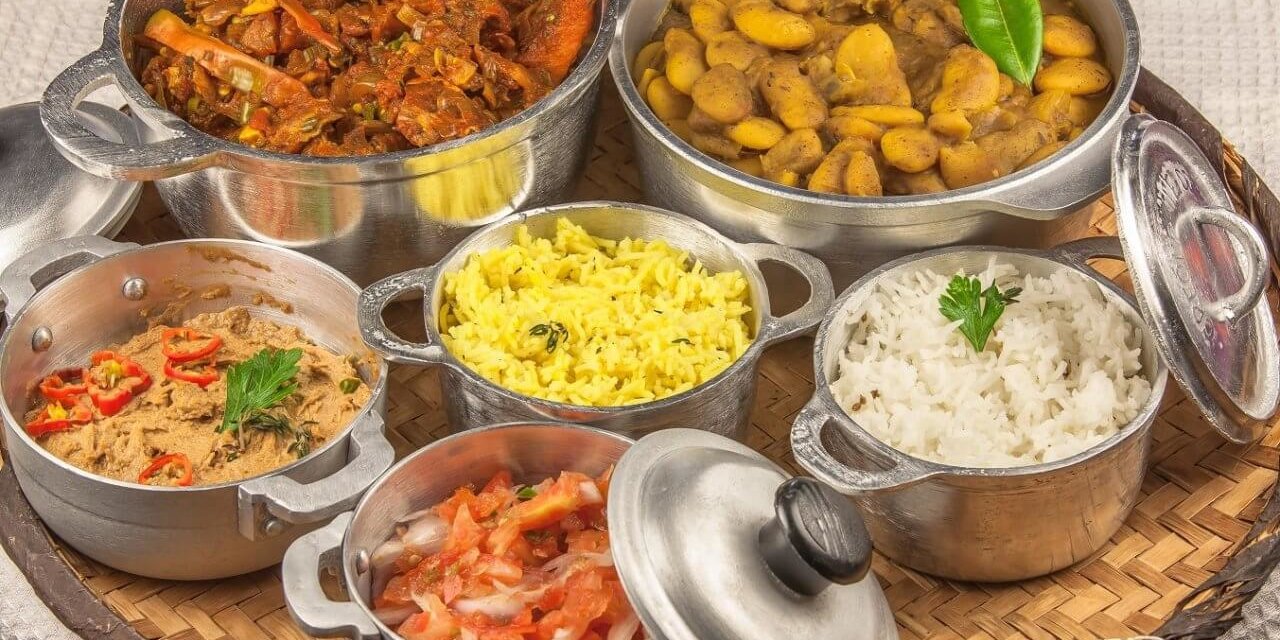 Reunion is well known for the diversity of its population, and the island’s tasty and delicious fare reflects this. Its cuisine was born in the 17th century, and its origins are as varied and mixed as the customs and people of India, Madagascar, China, Africa and France who settled in Reunion.

Its unique blend of flavours with a hint of chilli had no trouble taking root in the tropical climate. The use of varied ingredients such as turmeric, masala, tomatoes, and leafy green vegetables have led to very colourful food.

Culinary traditions have been handed down for generations, and over the years Reunion’s cooking has evolved from simple beginnings to become a cuisine in its own right. So here’s your guide to eating like a local!

Custom dictates that rice is placed on the plate first, followed by the pulses and then the carri on top.

When eating you should avoid mixing different dishes on the same plate: serve yourself with them one after another to make the most of each dish’s distinct flavour.

Unlike French food, locals don’t eat bread with carri as there is always plenty of rice.

This traditional snack was introduced to the island by the Chinese community. Bouchons are mini steamed dumplings made of pork or chicken wrapped in a dough skin, and are generally served warm as an appetiser. They are often seasoned with kaffir lime and accompanied by soy sauce (called ‘siave’) for dipping.

Reunion’s samoussas are smaller than conventional samosas, and originate from northern India (near modern-day Pakistan). Their popularity as an appetiser has led to a wide variety of fillings, and wherever you go in Reunion you are sure to come across them either stuffed with meat (pork, beef, or chicken), fish, vegetables, or even cheese.

Achards are vegetables that have been cut into thin strips and seasoned with oil, vinegar, turmeric, crushed garlic, onions, ginger and chilli peppers (think spicy pickled coleslaw without the mayonnaise).

This is a staple of local cuisine and is eaten with almost every meal. It may be plain or ‘zanbrokal’ (flavoured and coloured with turmeric and other ingredients).

Together with rice, this is a staple of Reunionese cuisine. Pulses are generally either red or white haricot beans, lentils, fresh peas or butter beans, and are traditionally prepared with turmeric and onion.

Brèdes are leafy green vegetables rather like spinach, and consist of the edible leaves of a wide variety of plants. The leaves and stems of plants such as christophine, squash, and moringa are used, being cooked before eaten.

This is a mixture rather like curry powder but with different proportions of spices. It is commonly used in the goat-meat dish cabri massalé but can also be added to other meat-based dishes.

Carri is a Tamil word which means ‘stew’ and consists of a dish whose only spice is turmeric. It is a cooking method has many possibilities and can be used for meat (e.g. beef or pork), poultry (chicken, duck, guinea fowl, etc.) and seafood. Meat and poultry are generally cut into small pieces, browned, then cooked with finely chopped onions, garlic, thyme, tomatoes, turmeric, salt, and pepper.

Carris and rougails are similar dishes, and it is difficult to be definitive about the difference between the two. For some Reunionese the distinction lies in whether or not you add tomatoes; for others, carris are seasoned with turmeric while rougails are not. It’s a debate that seems destined to remain up in the air!

Spicy rougails are chutney-like relishes prepared using either lemon, mango, peanut butter, tomato, cucumber or onions. You only need a small amount of this condiment to spice up your meal, but careful as they can be eye-wateringly hot!

Note that they should not be confused with rougails served as a main dish, as the latter are more like carris. This is because some dishes, made with ingredients such as sausage, smoked pork, or cod, are called rougails and not carris (see previous section).

This includes dishes such as chop suey, Cantonese fried rice, and sautéed noodles. If you eat out in Reunion you are likely to come across a range of Chinese dishes on the menu. The island is home to descendants of Cantonese people who emigrated from China in the mid-19th century. Over time, the Reunionese adopted these Chinese specialities and they are now part of the local food culture.

Reunion is a place of adventure, both for its activities and its cuisine. Tasting its food will take you on a voyage to discover the island’s melting pot, for Reunionese food is a reflection of its blend of culture and diversity. Locals have embraced this culinary mixture, and dishes are are no longer ‘Indian’, ‘Chinese’ or suchlike, but Reunionese.

Why not book one of our sightseeing tours to discover more about our extraordinary and unique island?