Cilaos, where tradition and nature meet 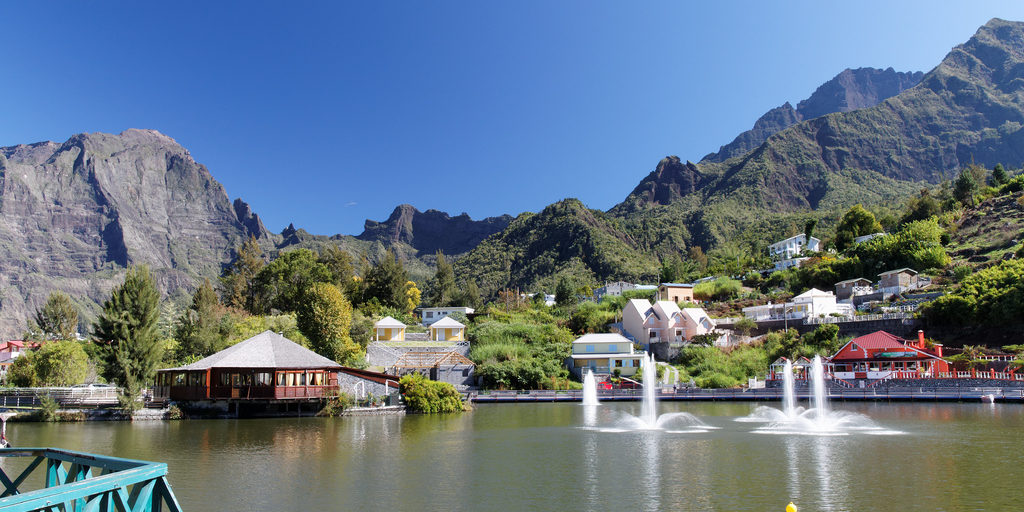 Cilaos is one of the Reunion’s three natural amphitheatre-shaped inhabited valleys, which are known on the island as cirques. It is drier than neighbouring cirque of Salazie, and more easily reached than the cirque of Mafate. Famed for its thermal springs, wine, lentils, embroidery, canyons and gorges – as well as the road with 400 twists and turns that must be taken to get there – visiting Cilaos will be a highlight of any trip to Reunion. The eponymous small town is encircled by massive mountain walls and towering volcanic peaks that form part of Reunion’s UNESCO Natural World Heritage site, and is the starting point for several of the island’s most iconic hikes, including the trek up to the 3071-metre summit of Piton des Neiges.

A place of refuge for escaped fugitives during the time of slavery, Cilaos emerged from isolation after thermal springs were discovered there in the early 19th century. The settlement gradually started to develop with the arrival of wealthy locals who came to take the waters, and who had to be carried to Cilaos in sedan chairs.

A winding road with 400 bends

The completion of a proper road in 1927 was a milestone for Cilaos: after five years’ work the cirque could be reached much more easily, albeit by a road with 400 turns! Today it only takes an hour to drive the 35 kilometres to Cilaos from Saint-Louis, near the coast. It is a remarkable road, with sections that snake along the foot of steep cliffs, hairpin bends, and narrow tunnels: one on which you should take the time to stop and admire the breathtaking views.

After dozens of zigzags you arrive at the small town of Cilaos, which is perched atop a plateau at 1200 metres altitude, and over which tower Piton des Neiges and Reunion’s third highest peak, Grand Bénare.

In the town you can visit the Embroidery Centre and find out more about Cilaos’ unique drawn-thread style of embroidery. These delicate designs are sewn on white fabric, and are known locally as ‘days’ as the intricate openwork lets daylight pass through. Angèle MacAuliffe, daughter of the thermal institute’s doctor, was the first to teach the cirque’s young women this type of embroidery at the beginning of the 20th century. Today this distinctive style of needlework continues to develop, and Cilaos’ embroiderers pass on Angèle MacAuliffe’s legacy from one generation to the next.

Take time to stroll along the main street and narrower side streets lined with colourful Creole houses, then head to the church Notre Dame des Neiges (literally ‘Our Lady of the Snow’), or walk to Mare à Joncs, a small lake where you’ll find a number of restaurants and refreshment stands. If you’re in Cilaos on a Sunday morning you can also meet some of the friendly locals buying and selling at the colourful weekly street market.

There are two specialities you should taste when you’re in the cirque: lentils and wine, although of course the latter should only be appreciated in moderation! Since the mid-19th century, Cilaos lentils have mainly been grown in and around the hamlet of Ilet à Cordes, and are smaller and paler than other varieties. Apparently the volcanic soil and cirque’s microclimate are what gives them their flavourful taste. Cilaos is also the only place in Reunion that produces wine: red, rosé and white. You may hear about ‘wine that drives you insane’, but there’s been no need to worry since the ‘Isabelle’ grape variety was banned; all Cilaos’ wine is now grown from quality varieties such as Pinot Noir, Malbec, or Chenin. The Chai de Cilaos winery is spread over twenty or so hectares, at altitudes ranging between 600 and 1300 metres, and currently about 30,000 bottles of Cilaos wine are produced each year.

Explore the paths and canyons of the cirque

The cirque of Cilaos has a well-deserved reputation as being a hiker’s paradise. The path up to the Roche Merveilleuse viewpoint (which can also be reached by car!) affords a magnificent view over the town and surrounding caldera ring. The footpaths leading to La Chapelle, Col du Taïbit, or Bras Rouge waterfall are also highlights. More than anything else, Cilaos is popular as the starting point for the hike up to the island’s highest point, Piton des Neiges, which is generally done over two days (although it can also be done in one (long) day).  Canyoning is popular with adventure seekers. A route for novices lets you experience the renowned Fleur Jaune canyon, where you abseil down 50 metres: thrills galore are in store!

Relax at the spa

After all this activity, you might then want to relax at the thermal baths, whose iron-bearing waters have made Cilaos well-known as a spa town. The spa is located at the start of the road that leads to the hamlet of Bras Sec. The baths are fed by a spring called ‘Véronique’, used for medicinal water drinking, while the 37°C waters that gush from the spring known as ‘Irénée’ are used for bathing in.

Want to discover more about Reunion Island? Be sure to take a look at our wide range of sightseeing tours!