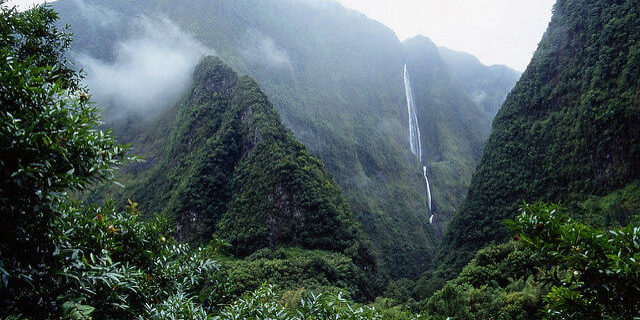 ‘Shining at the heart of the island’ … is the cirque of Salazie. These few words are the motto of this cirque and eponymous municipality located in the centre of Reunion. Like neighbouring Mafate and Cilaos, Salazie is a cirque (volcanic caldera) created by massive landslides around the now-dormant volcano of Piton des Neiges. Salazie holds several rainfall world records, and is particularly noteworthy for its magnificent waterfalls. Its whole land area forms part of Reunion’s UNESCO World Heritage site. Only one road, from Saint-André, leads to the island’s lushest cirque and it is bordered by picturesque villages and waterfalls.

Salazie boasts the highest waterfall in France, Trou de Fer, measuring 725 metres. Several waterways flow into this spectacular horseshoe-shaped chasm, whose name literally means ‘Iron Hole’, and which was created when parts of Piton des Neiges collapsed. If you’d like to admire it at close quarters you can walk there through the forests of Bébour and Bélouve. Or why not take a helicopter ride over Trou de Fer for some breathtaking views?

‘Cascade Blanche’ is another of France’s highest waterfalls. It’s easy to spot on the road between Saint-André and Salazie, just after passing underneath ‘Pisse en l’air‘ (a small, permanent waterfall that splashes directly onto the road). With a height of 640 metres, Cascade Blanche comes a close third to France’s second highest waterfall, the 647-metre Bras Magasin, located at nearby Takamaka.

Shortly after leaving the village of Salazie you will come across the ‘Voile de la Mariée‘, possibly the best-known – although not the tallest – waterfall in Salazie. It actually consists of several waterfalls that all flow down the cliff face side by side, and are clearly visible from the road; a narrow pathway leads to their foot. The waterfall is said to take its name from the doomed romance between a rich young man and a poor maiden. Legend has it that the sweethearts decided to elope and marry in secret. But on the day of the wedding the bride’s father found out and threatened to kill his son-in-law, forcing the newly-weds to flee. While running away the young bride fell to her death from the mountainside, but her wedding veil remained suspended, thus giving its name to the waterfall.

Hell-Bourg, one of France’s most delightful villages.

Salazie is also known for its charming colourful Creole houses, and those found in the small town of Hell-Bourg are particularly attractive. Hell-Bourg is often considered as the cirque’s unofficial capital and is also the only village of overseas France to be classed as one of ‘France’s prettiest villages’. A popular spa resort after the discovery of iron-bearing thermal springs in 1832, for more than a century Hell-Bourg attracted many of the island’s wealthiest families until the springs were blocked by a cyclone in 1948. This century-long golden age led to the construction of some lovely bourgeois villas, one of which is Maison Folio. Parts of the house and its entire luxuriant garden are open to the public: a visit that will transport you back to the 19th century.

Not far from the village don’t miss the magnificent viewpoint over Piton d’Anchaing, a 1352-metre flat-topped peak in the middle of the cirque. According to local lore, Anchaing was a runaway slave who took refuge on top of the peak with his wife Héva. For Reunionese people the couple embody a heroic struggle for freedom.

From Salazie village to Grand-Îlet

While Hell-Bourg is the cirque’s tourist hub, the village of Salazie is its administrative centre. There you can visit the church Église Notre Dame de l’Assomption, located just next to the town hall. Two square crenelated towers flank its façade, an architectural style that was inspired by Reims cathedral in mainland France.

On the route between Salazie and Hell-Bourg you can also take a break at Mare-à-Poule-d’Eau, a popular spot for family picnics and tilapia fishing.

Perched at an altitude of 1100 metres, Grand-îlet and its surroundings are both rural and peaceful. You might see green chouchou growing plentifully by the side of road, and the cirque is often nicknamed the ‘Land of Chouchou’. Called ‘christophine’ in the Caribbean or ‘sayote’ in the Philippines, this plant originates from Mexico and is also cultivated for its leafy greens – known locally as brèdes – as well as its pear-shaped ‘fruit’ which is cooked in gratins and stews or even baked in cakes.

Église Saint-Martin church, located in the centre of Grand-Îlet village, is also worth a visit. Destroyed by a cyclone in 1994, it has been faithfully rebuilt as it was before, thereby preserving the wood shingles that are so characteristic of its Creole architecture. If the weather is good you could even stop off at Mare-à-Martin, a small lake in which Piton des Neiges is reflected.

It’s also from near Grand-Îlet that two of the best-known hikes to Mafate start: the trail leading from the Col des Boeufs mountain pass to La Nouvelle, and the sentier Scout path that links the Col du Bélier pass with the hamlet of Aurère.

Looking to visit the authentic Salazie in an original way? Let one of our teams guide you to the heart of the cirque. Our ‘Salazie’ tour includes all the highlights!